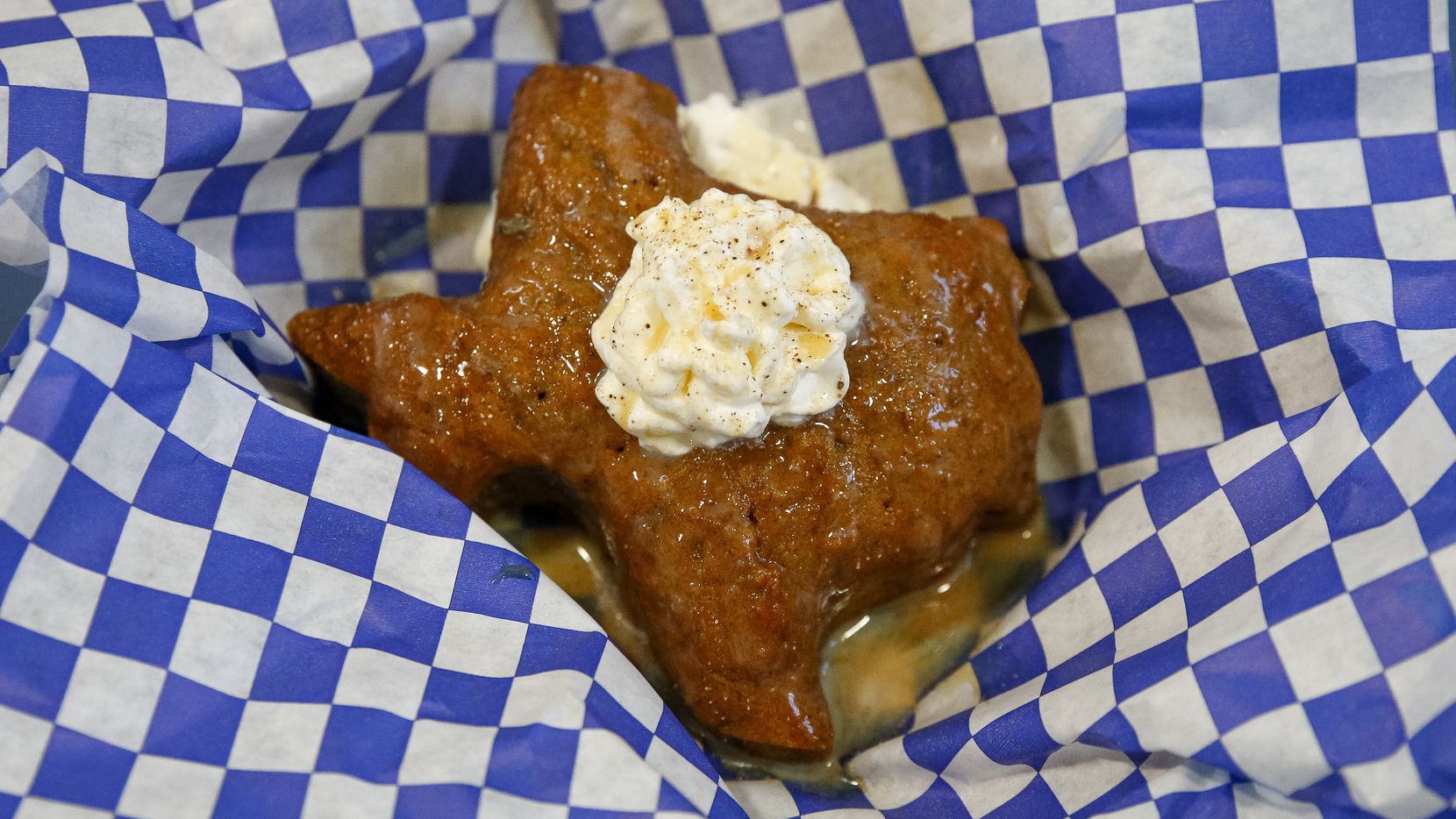 Have you missed your deep fried twinkies? A funnel cake bacon queso burger? Maybe fried jello? Have no fear! The deep fried, super creative State Fair of Texas’ food competition returns this fall after a very long year. Not only will we have brand new culinary creations, all the other things we loved about the State Fair are returning, too. The Dallas Morning News has all the details.

Dallas’ biggest, greasiest and weirdest food competition is back after a one-year break.

When the State Fair of Texas opens Sept. 24, 2021, concessionaires will serve a host of new fried foods — made from recipes some have been tweaking for two years. The fair was canceled in 2020 because of the coronavirus pandemic.(Ashley Landis / Staff Photographer)

On Wednesday, Aug. 11, reps from the State Fair of Texas announced the 10 Big Tex Choice Awards finalists — a list of judges’ favorite dishes, each of which will be sold at the fair during its three-week run Sept. 24 through Oct. 17.

These foods often become the best-selling dishes at the State Fair each year. And fairgoers come from around the world to try them.

Deep Fried I-35: Fun to say, but what’s in it? It’s a kolache topped with smoked brisket, peaches and a Dr Pepper barbecue sauce. It was inspired by Texas ingredients Clint and Gretchen Probst found on trips up and down Interstate 35E.(Elias Valverde II / Staff Photographer)

Concessionaire James Barrera has served fried ice cream at his State Fair booth since 2005. He’s back with another fried ice cream dish in 2021. The Armadillo is bigger than it looks: It’s the size of two outstretched hands and is made with two fried sugar cookie fritters on the outside, cookie butter ice cream in the middle.(Elias Valverde II / Staff Photographer)

The declaration of finalists felt especially spirited — even despite the early 6:10 a.m. announcement time — because the Big Tex Choice Awards was canceled in 2020, as was the State Fair of Texas. The concessionaires who annually enter the competition had two years to prepare their recipes, and many took that time seriously.

Imagine if you took the best of your kids’ Halloween basket and put it on top of a soft pretzel. That’s Isaac Rousso’s vision with his deep-fried Halloween dessert. It was inspired by his two kids.(Elias Valverde II / Staff Photographer)

“We don’t talk about dentists, sugar or calories at the State Fair,” Rousso says. (Amen.)

The Big Tex Choice Awards announcement was special for Christi Erpillo, a 52-year concessionaire who will be serving funnel cakes, Fernie’s Deep Fried Peaches and other treats at the State Fair in her mother’s honor. Wanda “Fernie” Winter died in June at age 95. She worked at the State Fair since 1967 and was often called the “funnel cake queen” of the State Fair of Texas; her daughters now run the family’s five concession stands.

Fernie’s Fried Toffee Coffee Crunch Cake was named after their mom, and it was perfected just days after she died.

“It’s going to be emotional being here without Mother,” Erpillo says. “But it’s wonderful to be back.”

A picture of Wanda “Fernie” Winter rests on the table of her daughter Christi Erpillo’s entry during the unveiling of the Big Tex Choice Awards finalists at the Briscoe Carpenter Livestock Center at Fair Park on Wednesday, Aug. 11, 2021, in Dallas.(Elias Valverde II / Staff Photographer)

A chair embroidered in gold with the name “Fernie” will be positioned at The Dock, where Winter often sat well into her 80s and 90s, chatting up customers and amusingly bossing around her staff.

Another longtime State Fair family, the Parishes, are missing their matriarch as well: Norma Parish died last week, after working at the fair for 35 years, under the concessions company name Gourmet Royale.

Her son Greg Parish is keeping up her legacy and is a Big Tex Choice Award finalist for his deconstructed, fried gumbo ball — a spicy, savory bite concocted from Norma Parish’s recipe. The fried okra on the side comes from South Dallas company Bonton Farms.

While the State Fair of Texas has plenty of attractions, like animals, cars, live music and games, food is now one of its main events. The Big Tex Choice Awards was established in 2005. Fried butter won awards (and expanded waistlines) in 2009. Then came fried bubblegum in 2011. Fried Jell-O in 2016. By 2019, entries included fried fettuccine Alfredo, fried chicken atop a Big Red-infused doughnut, and a fried fruit dessert with a fun name, the Fla’Mango Tango. Gosh, what haven’t they fried?

As Brent Reaves points out, the Big Tex Choice Awards today is more chef-driven than ever. No longer can you fry a candy bar and call it a winner. Reaves and his team spend all year thinking about how to develop complex yet approachable dishes with head chef Ronesha Childress. This year, the Reaves brothers — who own and operate Smokey John’s Bar-B-Que — join 87-year-old concessionaire Ruth Hauntz on two finalists, the brisket brittle and the crispy crazy corn.

In the corn dish, each kernel is deep fried individually, a time-consuming process the Reaveses said was a company secret. The fried corn kernels are topped with pulled pork, pineapple slaw and jalapeño crema.

Now that the finalists have been announced, the winners will be named Aug. 29 in a closed-to-the-public event. Previously, the State Fair hosted a taste test and awards ceremony open to folks willing to spend $100-$125 per person for a ticket, with the money going toward scholarships. That event is only for the media in 2021, for COVID-19 safety reasons, Condoianis says.

Go to dallasnews.com/food on Aug. 29 to read our story about the winners.

Condoianis says executives are “constantly in conversations” about safety protocols at the State Fair this year. She encouraged fairgoers to get vaccinated.

”It is not lost on us that without the COVID-19 vaccine and vaccination efforts throughout North Texas and the Lone Star State, the State Fair would not be possible this year,” she said at the press conference.

“We will continue to monitor the situation and provide updates as Opening Day draws closer,” Condoianis says.

The State Fair of Texas runs Sept. 24 through Oct. 17 at Fair Park in Dallas. All of the foods that are Big Tex Choice Awards finalists will be sold at the State Fair.