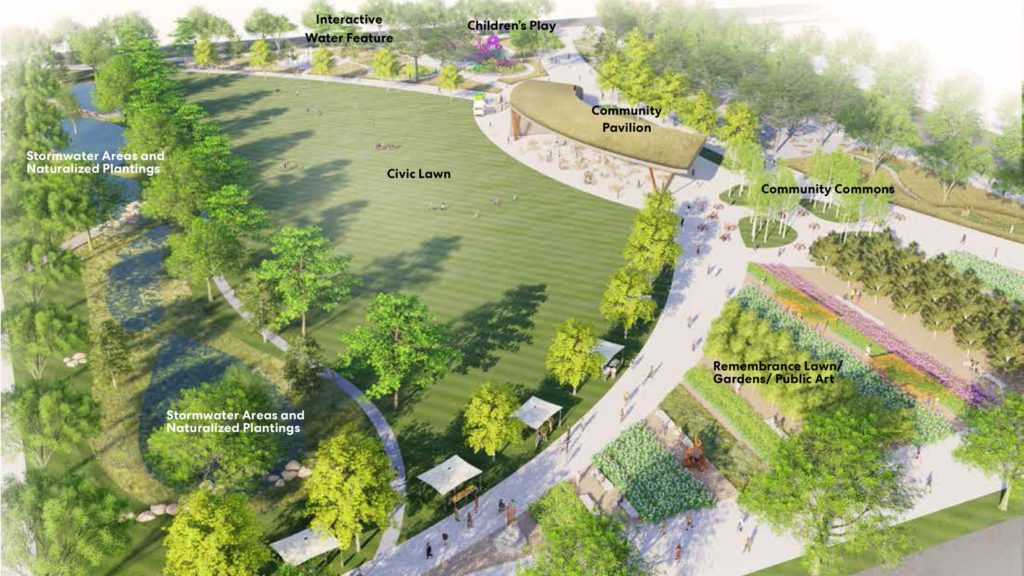 Living in the DFW metroplex, we have just about everything anyone could want in a city. We have amazing retail shops, theatre, operasm museums, and the list goes on. One of the most recognizable and historic places is our Fair Park. It’s original buildings form the backdrop to so many events. It’s about time we visit the idea of preserving and improving the park for the future. And that’s just what’s being discussed, according to the Dallas Morning News.

A conceptual rendering from the Fair Park Master Plan Update, as presented to the Dallas Park Board in June 2020, shows an idea for a Community Park that would replace acres of concrete on the park’s southeast side, along Fitzhugh bordering the residential neighborhood. The caption specifies that this is a conceptual rendering only, and that “a final Community Park design will be developed in a separate design process.”(Perkins & Will / Fair Park First)

Fair Park First, the nonprofit that manages the South Dallas historic site, announced the beginning of the “Fair Park, Your Park” campaign on Wednesday with a goal of raising $85 million in the next five years for the first phase of a transformation that will turn sprawling parking lots into more green space.

Phase one of the plan includes the small MLK Gateway Park at one of the Fair Park entrances off Robert B. Cullum Boulevard; a 14-acre Community Park designed with a vibe akin to Uptown’s Klyde Warren Park; and a nearby parking deck to replace surface lots. A 2-acre music green is planned for later in the park’s redevelopment.

Keyes called the park an opportunity for Dallas to stand out globally as a “bridge from the legacy of Dallas to the future of Dallas.”

“Fair Park is yet another opportunity to build that image of our community as a shining light, a city of the future, representing a broad diversity all coming together to make Dallas a great place to live and work,” said Keyes, former CEO of Irving-based 7-Eleven.

Last fall, when representatives from Fair Park First, its for-profit partner Spectra and the Dallas Park and Recreation Department presented the 20-year master plan update to restore the park, the City Council approved it unanimously.

In the 1970s, the city bulldozed part of the area to build parking lots, erasing a community of homes and businesses belonging to Black families.

Biederman Redevelopment Ventures, an urban planning company that will oversee the 14-acre Community Park, and Rise360 Consulting, will partner in raising money for the project. Campaign co-chairs will also promote the project to potential donors.

“This is more than just an effort for Fair Park,” Keyes said. “This unity effort speaks to the greater opportunity within Dallas for us to come together as one city.”

In late October, $2 million had already been raised for phase one, expected to be completed in 2024.

A spokesperson for Fair Park First said Thursday that “we have secured a number of gifts” but that donors and amounts won’t be announced until April.