DFW Is Getting New Outdoor Parks To Explore 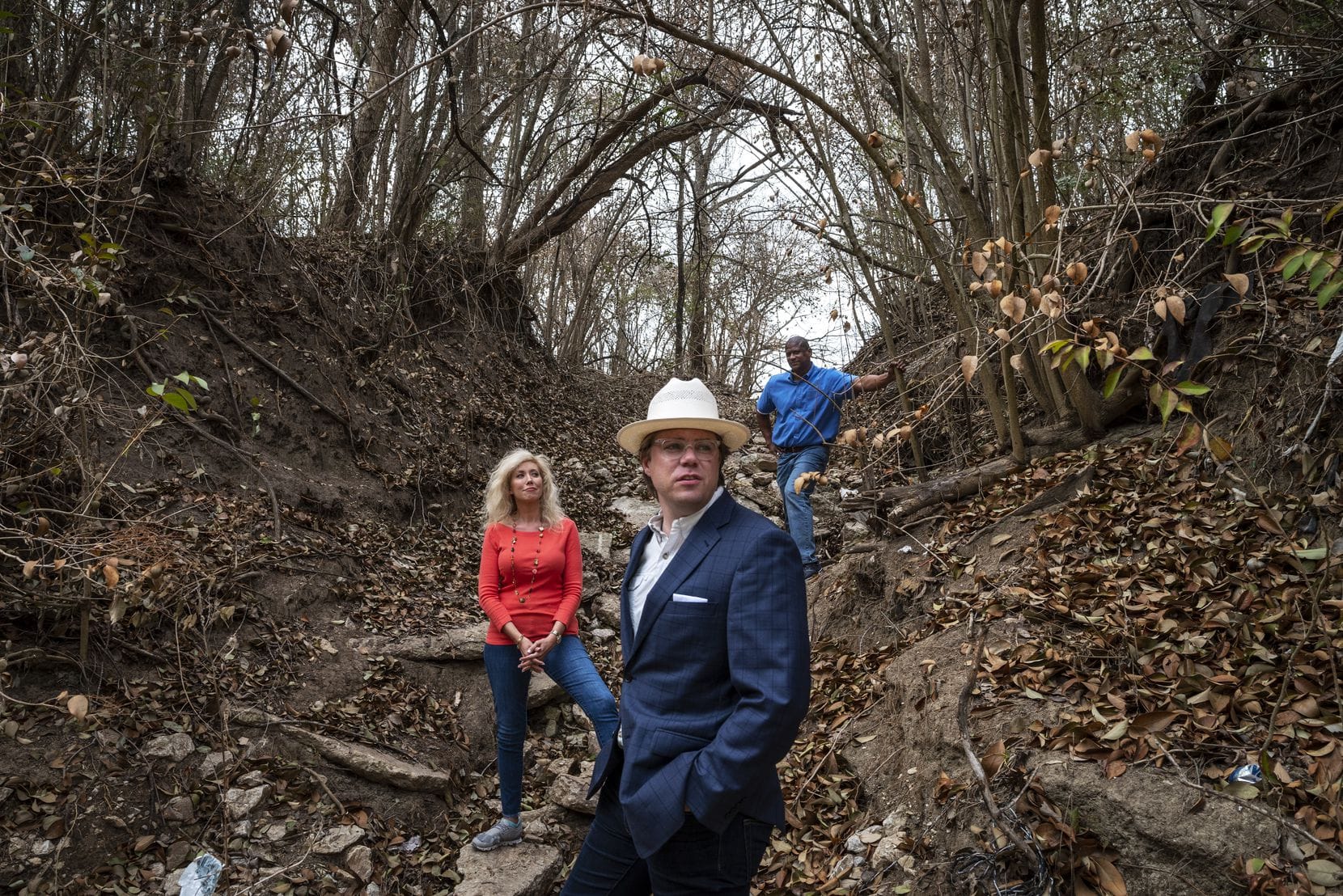 DFW is rapidly changing all the time. We sometimes get frustrated with traffic delays as new roads are built. We sometimes get tired of the constant construction projects for new shopping centers. But, in the long run we benefit from these changes. As DFW grows, we’ll be getting a few new outdoor attractions. A few new places to explore and escape into the forest, As reported in the Dallas Morning News, the new parks will be a spectacular addition for our communities.

The acquisition of Woody Branch green space off I-35E is part of an even bigger effort along Five Mile Creek and its tributaries.

John Jenkins, Dallas Park and Recreation director, heads into the Woody Branch greenspace with, in the distance, Park Board President Calvert Collins Bratton and Robert Kent, Texas state director for The Trust for Public Land.(Ben Torres)

I bet I’ve run on my East Dallas neighborhood’s Santa Fe Trail to White Rock Lake 2,000 times. But only occasionally do I consider my good fortune in being able to access these fabulous parklands just steps from my front door.

It’s even less often that I stop to remember that many parts of our city, especially those south of Interstate 30, historically have been denied the very amenities that the rest of us take for granted.

A ton of cheap talk on the topic of equity — whether in education, economics or quality-of-life issues such as decent parks — gets thrown around in Dallas. But too seldom does anything really seem to change.

That’s why it’s important to back up and look at a little-noticed but hugely consequential vote by the City Council last month: the unanimous approval of the largest addition to our parks system in more than 20 years — in the heart of southern Dallas.

Acquisition of these 82 acres along the banks of the Woody Branch of Five Mile Creek will protect a forested sanctuary whose future was long in danger of being swallowed into the highly developed urban area that surrounds it.

We’re talking about acreage that the Trust for Public Land estimates is home to 16,000 trees, which account for the capture of 3,700 metric tons of carbon annually. Those high-quality hardwoods are critical to combating the harm done by Dallas’ many heat islands — expanses of concrete that trap hot air in the summer.

The $2.49 million purchase comes from the city’s Reforestation Fund, created several decades ago and made up of the fees paid by developers who remove trees on their properties. The fund is regularly tapped for the planting of new trees around the city; the Woody Branch project marks the first time it has been used to acquire parkland.

You had no idea this vote even happened, did you? That’s because the Feb. 24 vote came just as we were all getting back on our feet after the devastating winter storm.

The Trust for Public Land drove this deal as part of its mission to protect greenspaces and create parks. The nonprofit has planted over 5,000 parks and natural areas across the nation since 1972, including more than 43,000 acres in Texas.

Its recent work in Dallas, under the umbrella of the Five Mile Creek Greenbelt master plan, has focused on parts of the city overlooked, if not downright discriminated against.

The master plan, approved by the Dallas Park Board in early 2019, came out of a collaboration of community members, the Trust for Public Land and the city’s Park and Recreation Department. That blueprint laid a foundation for trails, parks and greenspaces following Five Mile Creek and its tributaries.

A portion of Woody Branch Creek located within the 82 acres of greenspace that the Dallas City Council voted to acquire for a future park near Interstate 35E and West Ledbetter Drive.(Ben Torres)

Next up is the blueprint for Woody Branch, in the Glen Oaks neighborhood and just southwest of the Interstate 35E-West Ledbetter Drive intersection.

“Just like the other parks, this planning won’t be about what does the Trust for Public Land want, but what does Glen Oaks want,” said Robert Kent, the nonprofit’s Texas state director. Even the names Woody Branch and Alice Branch are simply placeholders until community members make official decisions on what to call them.

Walking the Woody Branch acreage, I felt like I had stumbled into a western remnant of the Great Trinity Forest — isolated from the massively larger forest by concrete and development but similar in its shades of tranquility.

The westernmost edges of the Woody Branch land are less than a mile from I-35E, but mostly it was birds and breezes, not vehicular traffic, that provided the hike’s soundtrack. Hawks glided on the wind and moss carpeted the climb down to the clear limestone creek.

Woody Branch Creek, which flows under I-35E before hooking into Five Mile Creek and, eventually, the Trinity River, is one of the many tributaries that have grooved southern Dallas’ distinctive hills and valleys.

Looking south from atop one of the two large open spaces within the new acquisition, you see almost nothing but forest — the greens of the cedars and the grays of mostly dormant deciduous trees lit slightly by the orange-red hues of emerging buds.

Robert Kent (front), Texas state director for the Trust for Public Land; Dallas Park Board president Calvert Collins Bratton; and John Jenkins, Dallas Park and Recreation director, stand near the bottom of a hill on the new parkland that leads to Woody Branch Creek.(Ben Torres)

Dallas park director John Jenkins, who has been with the department for 27 years, said he can’t recall any project with this much size and diversity. “It will give area residents a chance to connect with nature, and also is a chance for students to learn about nature,” he said. “We need these opportunities now more than ever.”

Park Board President Calvert Collins Bratton showered major credit on the Trust for Public Land for its perseverance. It’s always difficult for the city to acquire parkland and, at best, 5- or 10-acre parcels are more often the norm.

“If TPL hadn’t spearheaded this, we likely wouldn’t have put all this together,” she said.

Collins Bratton sees Woody Branch as a much-needed refuge for area residents. “It is high time we look south of I-30 because we have such beautiful green space here,” she said. “We need to add good park assets to all parts of the city that lack them.”

The greenspace investments already in the works under the Five Mile Creek Greenbelt master plan should pay off in scores of ways for underserved residents. Of the 186,297 people living within the creek’s watershed, only 54% have access to a park or trail within a 10-minute walk of home, according to the Trust for Public Land.

The nonprofit is working through the final paperwork with the seller, Corinth Properties, and expects to have the land conveyed to the city next month.

The newly acquired 82 acres near Interstate 35E in southern Dallas include an estimated 16,000 trees, according to the Trust for Public Land, which was instrumental in making the deal.(Ben Torres)

With Glen Oaks neighbors in the lead, a task force will determine the best way to go about community meetings and other opinion-gathering from which a master plan can be devised.

Nothing has been decided, although nearby residents have expressed interest in a playground, gardens, picnic pavilion, paved walking paths, nature trails and a multipurpose athletic field.

City Council member Carolyn King Arnold, whose district includes the Woody Branch land, said before the Feb. 24 vote that she is excited to work with the stakeholders “to create a wonderful park that will be a landmark asset for generations to come.”

I don’t know about you, but these days I’m very much in need of some good news — and this new park plan is just that.

Those of us who’ve had the privilege of access to quality parks all these years are lucky. But Dallas is even luckier to have a champion like the Trust for Public Land take the lead in bringing amenities to underserved neighborhoods — with the pledge that the individual parks will be created in a likeness of what each community wants and deserves.