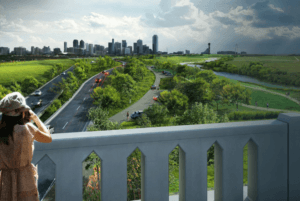 DFW is a rapidly changing all the time. We sometimes get frustrated with traffic delays as new roads are built. We sometimes get tired of the constant construction projects for new shopping centers. But, in the long run we benefit from these changes. As DFW grows, we’ll be getting a huge new outdoor attraction – one that really puts us on the international map again, As reported in the Dallas Morning News, the new park will be a landmark.

Dallas, Texas, is getting a lot greener.

The city is building a 10,000-acre nature district— nearly 12 times as large as Manhattan’s Central Park — along the Trinity River. Featuring plenty of walkways, sports fields, trees, and other flora, the site will become one of the largest urban parks in America.

It will become part of the larger nature district, called the Trinity River Project, that began in the early 2000s. As of June 2015, the city had spent over $609 million to build trails, a bridge, a horse park, a golf course, and a community center in a 6,200-acre forested area. In the future, there are also plans to build shops, restaurants, housing, and offices near the river.

Check out what the Harold Simmons Park portion, designed by Michael Van Valkenburgh Associates, will look like:

Spanning 285 acres, the Harold Simmons Park will be a part of Dallas’ 10,000-acre nature district.

Visitors will be able to peer out on a pedestrian overpass. As seen below, a few roads will also run through the park.

Before the Harold Simmons Park breaks ground, the US Army Corps of Engineers will need to approve the plans since it’s in a flood zone.

When it rains, the park will welcome the water, lead architect Michael Van Valkenburgh said at a recent conference. The park will naturally flood in controlled areas, and the water will drain into bioswales, sloped courses that absorb water.

The areas most at risk for flooding, which will include sports fields and paved trails, will be elevated and farthest from the river. Five bridges will connect the park to the city center.

One of the elevated parts, pictured below, will feature a playground, a trail, benches, and grassy lawns.

People will be able to walk along the river, too.

Since it will stretch into the city center, the park could bridge the gap between the city’s poorer southern districts and wealthier northern areas, Rawlings told Dallas News.

He said the park would “redefine Dallas for the 21st century.”