Need Some Piece And Quiet DFW? 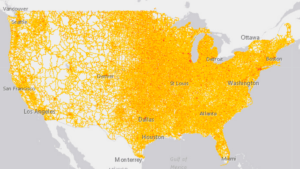 If you live in the DFW metroplex, getting a quiet moment outside is rare. All of the concrete and glass reflects noise as well as heat. Just about everything around you is creating the “hum” that never seems to really go away. Ever wonder just how loud your neighborhood really is? The National Public Radio website posted an article today about a new map that can tell you.

How Noisy Is Your Neighborhood? Now There’s A Map For That

A pointillist portrait of the United States in noise. Bureau of Transportation Statistics/Screenshot by NPR

There’s no denying it: Los Angeles isn’t exactly gentle on the ears.

That’s one lesson, at least, from a comprehensive noise map created by the U.S. Bureau of Transportation Statistics. On the interactive U.S. map the agency released this week, which depicts data on noise produced primarily by airports and interstate highways, few spots glare with such deep and angry color as the City of Angels.

Blame the area’s handful of major airports and its legendary snarls of traffic — ranked this year as the worst in the nation.

If any Angelenos would like to escape to quieter pastures, though, they’ve got options.

“More than 97 percent of the U.S. population has the potential to be exposed to noise from aviation and Interstate highways at levels below 50 decibels or roughly comparable to the noise level of a humming refrigerator,” the BTS notes in its release.

The agency says it used data compiled by the Federal Aviation Administration and the Federal Highway Administration to draw up its map, also borrowing the tools of both to determine average daily noise levels produced by transportation.

So if you should happen to find yourself stuck beside a particularly cacophonous construction site or concert venue, sadly your aural plight won’t get any mention from BTS.

But cities like New York City and Chicago naturally offer plenty of visual proof of just how loud it can be to live in a big city. Those bright spots of purple on the pointillist displays below can pack an average of more than 80 decibels of transportation noise a day — or, as BTS puts it, about as much noise as a garbage disposal.

Concerned? Well if all else fails, you city slickers, remember: It’s not all clatter and clamor. There’s always Twin Falls, Idaho.

Check out the map for yourself here.

When you need a dependable, knowledgeable plumber, electrician or HVAC technician in the Dallas/Ft. Worth area, call a name you trust. Berkeys Air Conditioning, Plumbing & Electrical 24/7, Call us 877-746-6855877-746-6855 or visit berkeys.com for questions and scheduling information or on Facebook at Facebook.com/Berkeys.