Out And About At The DMA 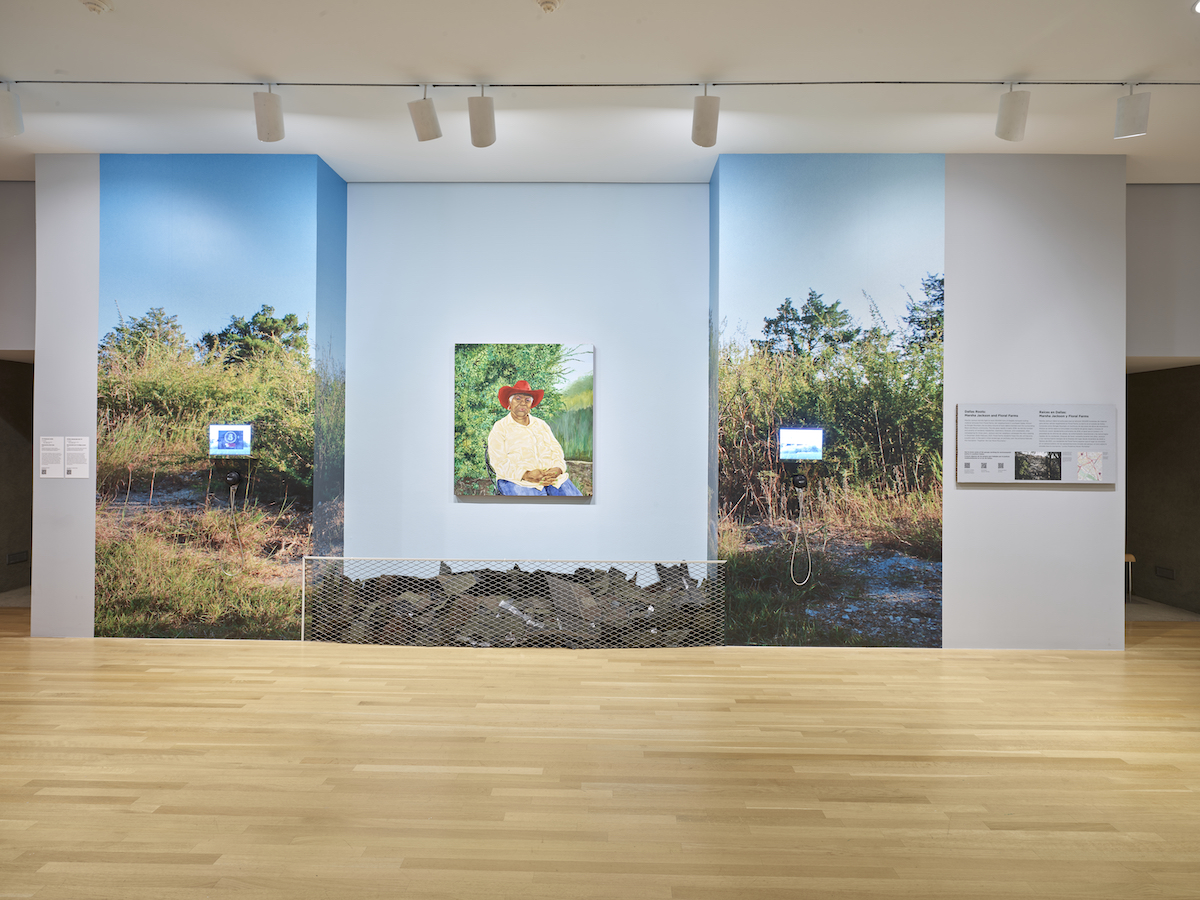 At the DMA, Artist Ari Brielle Highlights the Nature Where Shingle Mountain Once Was

Fundraising for the park where Shingle Mountain once stood is ongoing. Until then, the Dallas artist Ari Brielle explores the nature of this part of the city in a new exhibition at the DMA.
By  Matt Goodman | March 7, 2022|1:24 pm

Marsha Jackson is sitting in nature, wearing a cranberry-red cowboy hat and hoop earrings. Her nails are painted lime green. She’s staring at you when you look at her, stern but at peace, like she’s overcome something. Dallas artist Ari Brielle captured her as she was. “She painted it right to the nails,” Jackson said.

You can see this painting at the Dallas Museum of Art, part of Brielle’s exhibition, “Poisoned by ZIP Code.” The painting itself is hung on a blank wall, which is framed by a wall-sized image of the southern Dallas landscape in which Jackson lives. Two small screens flank the painting and flash archival photos, images of her family and of her community. And below Marsha there are the shingles, real shingles, a small pile of them that are jarring next to all that green.

Jackson was the neighbor to Shingle Mountain until the city moved it, which took almost three years. I’ve written a lot about this—so has the Dallas Morning News and KERA and WFAA and anyone else in town that’s paid attention—and I’m not here to bring you any news. Things are basically still the same. The city owns the larger of the two plots that once held the shingles after reaching a settlement with the previous landowner, whose lax oversight allowed the dumping; the pro bono arm of architecture firm HKS has designed a park for that space; fundraising is ongoing; the city still hasn’t paid to remediate the land to remove lead and arsenic.

I’m writing about this again because I’m struck by the exhibit at the DMA. Jackson and Brielle joined Paul Quinn’s Evelyn Mayo and HKS’ Erin Peavey in discussion at the museum on Saturday afternoon. Mayo, first with Legal Aid of Northwest Texas as a paralegal, did a ton of work researching the zoning in this part of Dallas. You can read more about that here.

But the best portions of that chat—which was expertly moderated by KERA’s Miguel Perez—were about the little moments that get lost in the bigger picture of how the city screwed up and allowed this mess to happen. There were takeaways like Marsha’s cowboy hat and her green nails, how depicting those small things matter so much. Brielle discussed her decision to highlight nature, because that’s what drew Marsha and her family and her neighbors to this part of southern Dallas. But during the pandemic “one of the only ways to connect with our friends and our families was to go to a park and eat,” Brielle said. There are always echoes.

The art is a connection, a way to empathize that news articles can’t quite reach. Marsha raised horses on her property before her neighbor was an illegal dump. She talked on Saturday about the “Black cowboys and cowgirls,” how the community “wants to keep that history going.”

Brielle’s exhibit reflects on that history while also recognizing the harm that happened there. “Our community doesn’t have sidewalks,” Marsha said. How many other communities around Dallas does that describe?