Get Out And Get Moving, Dallas 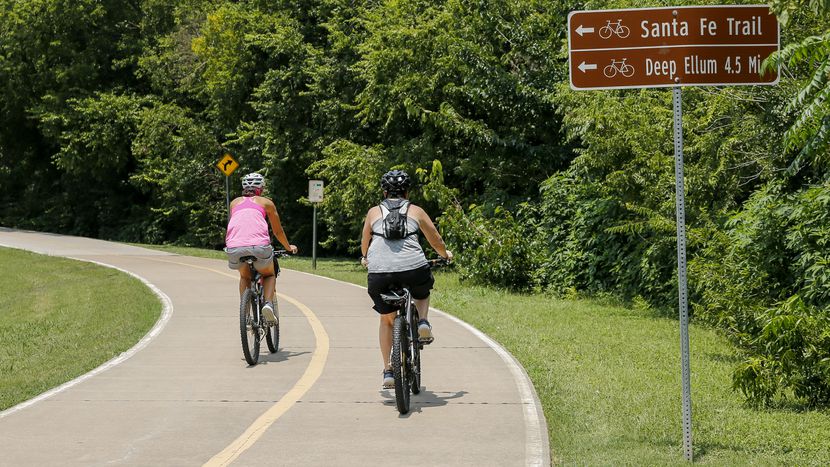 Now that summer is over, the temperature is beginning to drop nd we’re getting out more. Many of us are using our time outside on Dallas area hiking and biking trails. There’s good news coming for our Dallas trails. THEY ARE EXPANDING! Soon, we’ll be able to move around our city on new trails and an expanded trail system. This means more time in nature and less time on the streets. You can see the announcement in the Dallas Morning News.

New trails are coming to Dallas. Here’s what hikers and bicyclists need to know

Six trails and bridges are being built to provide bicyclists and walkers access to previously unconnected neighborhoods.

Six trails are set to be completed in the next two years, connecting North and South Dallas and giving walkers clear access to rivers and other trails. The developments include a walkable bridge over U.S. Highway 75, a trail from Dallas to its western neighbor, Fort Worth, and a 50-mile loop that will connect the entire city.

The trails are part of Dallas’ efforts to reconnect its neighborhoods — particularly in areas south of Interstate 30 that have been historically underserved.

“I see all these trails as a vital way to … make it easier for people to either walk or bike to transit stations or just walk or bike to neighborhood destinations,” said Jared White, a Dallas Park and Recreation planning and design manager.

Here are six trails that will alter the city’s landscape and make transportation — without a car — easier for Dallas residents.

New trails for walkers and bicyclists are in the works to connect Dallas.(Michael Hogue)

Part of the 65-mile Fort Worth to Dallas Regional Trail, this extension of the Trinity Skyline Trail will connect Dallas’ westernmost border with Irving, running along the Trinity River in West Dallas. The trail crosses the Elm Fork in Stemmons Corridor and connects with Irving’s Campion Trail. The Campion Trail provides views at greenery and urban locations, passing along the Elm Fork Trinity River and offering access to athletic fields and picnic areas. The trail allows access to Trinity View Park in Irving and connects suburbs to downtown Dallas.

A long-anticipated extension of the Katy Trail under Interstate 35E to the Design District and Trinity River is taking a giant step toward becoming a reality. Dallas’ sports arena tax increment financing board is recommending using $11.5 million from its bond fund to make the $22 million project happen. A group promoting the plan has already raised $10 million in private donations. The so-called Hi-Line Connector would link the popular trail from its end point at Victory Park to the opposite side via an underpass. Advocates see it as a way to open the Trinity River area to additional mixed-use development.

Running through Victory Park and into the Design District, the mile-long Hi-Line Connector will link the Katy Trail and the Trinity Strand Trail. The path will connect areas in downtown Dallas and include a portion running underneath the highway as well as a 12-foot-wide concrete trail, increasing transportation options from Katy Trail to the Trinity Strand Trail. The portion of the trail cutting underneath I-35E will include lighting and art installations.

“The end user piece is really going to be the most impactful part of this entire project,” said Philip Hiatt Haigh, executive director of the Circuit Trail Conservancy. “We’ve seen trails before in Dallas, but we’ve never had a trail that connects the entire city in a meaningful way.”

After nearly four years of construction, city leaders expect to open the nearly 5-mile east Oak Cliff trail this month. The path will run by the Cedar Crest Golf Course and connect schools, the DART Illinois Station and a library. The trail, which includes on-street pathways and a pedestrian bridge, will run along East Illinois Avenue and cross near South Marsalis Avenue. The trail will skirt residential areas and John Phelps Park, which boasts a recreation center, playground and picnic areas.

The half-mile Northaven Trail bridge near Royal Lane will allow pedestrians and cyclists to cross over U.S. Highway 75 and White Rock Creek to the east. The bridge is significant because it will connect the Northaven, White Rock Creek and Cottonwood trails east of the bridge. The North Dallas bridge will have dedicated parking at the trailhead, an arc over the bridge lanes, and will pass by restaurants and other local businesses near the highway.

The connector project will bridge the gap between the already popular Northaven Trail, a relatively flat path with access to numerous schools, dining and shopping opportunities. Currently, the bridge is not open, but construction has begun on both the east and west sides, said Jeff Kitner, president of the Friends of Northaven Trail.

The first phase of the Trinity Forest Spine Trail will run from the Santa Fe Trail to Samuell Boulevard. It is the first phase of the longest part of the loop, which aims to connect White Rock Lake and East Dallas to South Dallas and the Trinity Forest Trail System. The trail, which will be split into a north and south portion, will connect areas on both sides of I-30. The trailhead at Samuell Boulevard will be cleared of trash and feature a dedicated biking and pedestrian lane.

Hiatt Haigh said the trail will look similar to the White Rock Creek Trail, but will be placed at a particular elevation to avoid problems with flooding that can occur there. The 7.5-mile Spine Trail will allow residents south of I-30 to safely access northern neighborhoods without driving.

Construction on Dallas’ 50-mile loop’s Hi-Line Connector and Trinity Forest Spine Trail will begin later this year. The loop, which is designed to connect nine city districts and has been more than a decade in the making, is being spearheaded by the nonprofit Circuit Trail Conservancy. The new additions will include four trails totaling more than 10 miles, connecting 39 miles of existing paths to link urban views with natural landmarks across the city. If the nonprofit gains grant approval from the Texas Department of Transportation in November, Hiatt Haigh said, the project could hit a grand total of $85 million in funding.

“You can go around in a circle and never end up in the same spot,” Hiatt Haigh said.