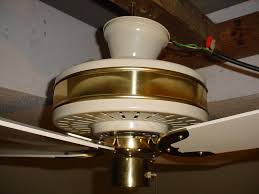 Almost all new ceiling fans today are equipped with a remote control, especially higher priced ceiling fans. The receiver part of the remote is nestled inside the fan body itself, while the control mounts either on the wall or into the wall as a switch.

Step-by-step instruction on how to wiring a ceiling fan with a remote control.

How to Install a Ceiling Fan Remote

Slide the ceiling fan remote receiver into space above the down rod. If it doesn’t fit, try other locations inside the canopy.

There are many “universal” ceiling fan remote control kits on the market for overhead fans controlled by pull chains and a singe wall switch. All of them feature on/off and fan speed control. Others also offer light-dimming and thermostatic control capabilities. But whether you can use a ceiling fan remote kit depends on the amount of free space inside the fan canopy.

Many “ceiling hugger”–style fans have enough free space for the receiver for the ceiling fan remote. But “down-rod” styles may not. Shut off the circuit breaker to the fan and lower the canopy (use a voltage sniffer to make sure the power is really off). Check the fit of the receiver before you commit to wiring it in permanently. Keep your receipt just in case.

With the power off, connect the hot and neutral wires to the “AC-in” wires on the receiver. Then connect the three remaining wires to the fan and light (they’re labeled by the manufacturer).

Reach into the housing and gently pull out the capacitor. Untangle it from the other wires. Then cut the capacitor lead wires one at a time, or remove the wire nuts and cut off the wire strands.

Next, remove the capacitor. A burned-out capacitor might have a burned smell, swollen sides or scorch marks. Those are sure signs it’s bad. But even if yours appears to be in good shape, replace it anyway because it’s still the most likely cause of your speed/humming problem (Photo 2, below). If you have any doubts about the fan switch, replace it, too. Remove the pull-chain switch by unscrewing the knurled outer knob. Pull the switch into the housing and disconnect the wires. Take both pieces to a ceiling fan or appliance parts store to get replacements. If you don’t have a local source for parts. Click on the “Capacitors” or “Wall Switches” tab to match each to a replacement. Finish the job by connecting the new parts and tucking everything back into the housing.

Ceiling fans with factory remote controls don’t use traditional capacitors to control fan speed. The remote receiver varies the voltage and current to change the fan motor speed. But ceiling fan remote control units can go bad too. Before you even think about tearing the fan apart to diagnose a problem, replace the batteries in the transmitter first. Then press the transmitter buttons to see if the LEDs light up. If you’re not sure whether the problem is in the transmitter or receiver.

Advantage Of Having A Remote Control Ceiling fan

Remote control ceiling fans enable us to turn them on or off at our discretion, without even getting up. Remotes also allow us to reverse the fan’s direction and/or change its speed. Many remote control fans also have the added feature of controlling the lights. Call (214) 238-8353 us for your home service and repair needs.